Our logo symbolizes our goal to create a positive impact on the world through robotics. Join us in this short article as we explain the meaning behind our logo…

To understand our logo better, we must first go back to 1966 and the first mobile intelligent robot. “Shakey”, as it was affectionately known, was fitted with computers, a TV camera, sensors, and wheels. However, what was truly game-changing about this mobile automaton (they thought the word robot would scare away backers) was how it was controlled. This is because the researchers devised a “sense-plan-act” approach to controlling Shakey:
• Sense the world, build an understanding of the world
• Plan a sequence of actions on what to do to get to the goal
• Follow the planned sequence of actions

Because Shakey was effectively alone in a room, this approach worked fine and allowed the researchers to create a lot of the first steps in what we know today as AI.
These methods work fine in games like chess, but since the real world is constantly evolving and changing, it had its limitations.

This is why a different approach to controlling robots in real-world environments came with the “embodied AI” movement. The “Braitenberg Vehicles” from 1984 are the prototypical example of this approach.
These two-wheeled vehicles were fitted with a simple control system. The sensors were directly wired to the motors, but with left-side sensors connected to right-side motors and vice versa. This gave the robots very smooth and agile movements, and what appeared to look like surprisingly sophisticated behaviour. This study also showed why the left side of our brains controls the right side of the body, and vice versa.
The key takeaway was that robots don’t need to know where they are or what their goal is, they just need to know what action to take based on the output from their sensors. However, embodied AI is a little limited when it comes to adding more knowledge into the control system.

Control Theory was originally developed for controlling machines or systems, but is also applicable to robotics. It is essentially a feedback loop system (also called a closed-loop system), where the goal is to constantly work to reduce the “Measured Error” until the desired goal (known as a “Reference) is reached.

In this theory:
• Reference: is the system we want
• Measured Error: is how the system is different from what we want
• Controller: our chosen action based on the error we see
• System: this is the world (what we want to control), including how it reacts to our system input
• Sensor: this is how we measure the system.

The controller is where all the magic happens. This is because the controller needs to figure out what output to give to fix the measured error. A correctly crafted control loop (as shown above) can quickly and effectively bring the system to the correct state. This is, of course, immensely useful for controlling the combustion temperature in a power plant, the speed of a car in cruise control, or the fan speed of the laptop I’m writing this on – as well as more advanced systems such as a robot.

Do you notice any similarities in control theory to the…

At REInvest Robotics, our goal is to make the world a better place through robotics, and what better way than using control theory. We consider the “System” to be “the World”, and the UN’s Sustainable Development Goals (SDG’s) the “Reference”. We can measure our performance in how we help decrease the “Measured Error” in the UN SDG’s.

Clearly, our logo is a closed feedback loop, where REInvest Robotics is the “Controller” that is trying to bring the world (the small box in the top right) to the right state. There are a lot of ideas in Control Theory on how to make the controller choose a control strategy, but none of these are easily applicable to the UN SDG’s view on the world (this would make for an awesome PhD, in my opinion). At REInvest Robotics we let our experience, intelligence, insight into robotics, and business (and to some degree, global politics) come into play, in order to give the right controller output. Then we have regular interval meetings where we evaluate, learn, correct our actions and get smarter. Hence the control theory approach, that is constantly measuring and adjusting at a fixed time interval. 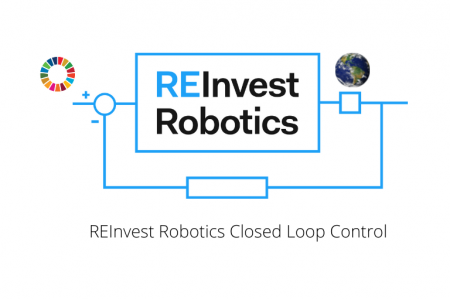 All copyrights for the UN SDG color wheel (top left) are reserved by United Nations and used here for concept illustration purposes only.

If you want to change the world, you have to know what you want. The world is not perfect, but we can make it better together.